Stan Manoukian is a French graphic artist born in 1969 in Paris.

He has hads a passion for drawing since his childhood and most of his inspiration comes from retro sci-fi, classic monster movies, as well as the novels of authors such as Edgar Allan Poe, Lovecraft, Mary Shelley and Jules Verne.

In 1988, after he graduated from the Estienne Art School, he started to work in France and the United States as a cartoonist, designer and storyboarder for the movie industry and in advertising.

In 2007, Manoukian issued himself an artistic challenge: draw one monster a day for one year. This larger scale initiative gave birth to the book called Diary of Inhuman Species, published by Ankama the following year.

Since then, the exploration of his phantasmagoric world pushes him towards bigger and more ambitious projects, testing diverse techniques in both drawing and sculpture.

He belongs to the worldwide generation of post lowbrow artists. With his increasingly detailed content, abounding with dreamlike creatures, his work harkens to the romantic paintings from the nineteenth century. His  menagerie is composed of creatures both extraterrestrial and from the deepest abysses on Earth, thereby transporting the viewer to a fantastic and surrealistic world, where nature is omnipresent.

Heir of Gustave Doré, Franklin Booth, and Bernie Wrightson, Stan Manoukian refines a unique visual scripture through hatching and dimming, which employs ink or graphite to mimic  an engraving.

Currently, his works are  internationally recognized and have been displayed in several exhibitions and books in the USA, Japan, Australia, France and Europe. 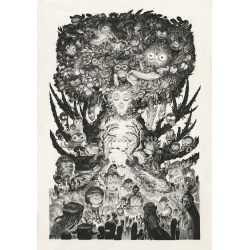 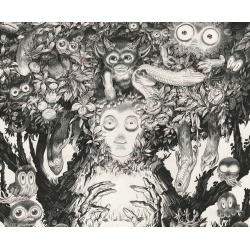